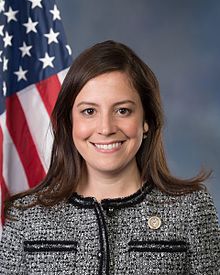 Congresswoman Stefanik, until recently, was the youngest woman ever elected to Congress in United States history.

Congresswoman Stefanik served as Director of Vice-Presidential Debate Prep to Paul Ryan where she oversaw all debate preparations for the Republican Vice Presidential nominee. She served as Director of Communications for the Foreign Policy Initiative, which launched Defending Defense, a coalition of think tanks warning of the dangers of the sequester.

From 2006 - 2009, Congresswoman Stefanik served in the West Wing of the White House as part of President George W. Bush's Domestic Policy Council Staff and in the Chief of Staff's office where she assisted in overseeing the policy development process on all economic and domestic policy issues.

As the first member of her immediate family to graduate from college, Congresswoman Stefanik graduated with Honors from Harvard University. She currently serves on the Senior Advisory Committee of Harvard's Institute of Politics, the largest political undergraduate organization.