Last October, MassFiscal called on the Office of Campaign and Political Finance to make a determination in the Thornton matter after a Globe Spotlight series outlined how the scheme worked. Partners at Thornton Law Firm contributed funds to candidates and Democrat organizations which were then reimbursed with company money. The scheme meant the dollars came from corporate coffers and were merely washed through personal accounts.


The firm is closely allied with former State Representative Garret Bradley, who served as its managing partner during the time many questionable contributions were made. When a lawmaker, Bradley was the House Chairman of the Joint Committee on Election Laws.


Craney said, "The Bradley connection gets my goat. Here's a guy who was entrusted by Speaker Robert DeLeo to build the state's campaign finance laws, and it turns out he's the fox in the henhouse."


"Michael Sullivan (OCPF director) responded quickly and appropriately to MassFiscal's complaint. The Thornton scheme may well be the most far-reaching straw donor scheme in the history of campaign finance law,” Craney said. "No good comes from holding onto tainted money. The Mass. Democratic State Committee and others who care about accountability must immediately purge their accounts of the funds. Holding onto it at this stage is the equivalent of corruption.”

Craney pointed out that several lawmakers, including Senator Elizabeth Warren, who had received donations under the illegal scheme, have already gotten rid of the dirty money.
Below is the original letter sent from MassFiscal to the Director of OCPF. 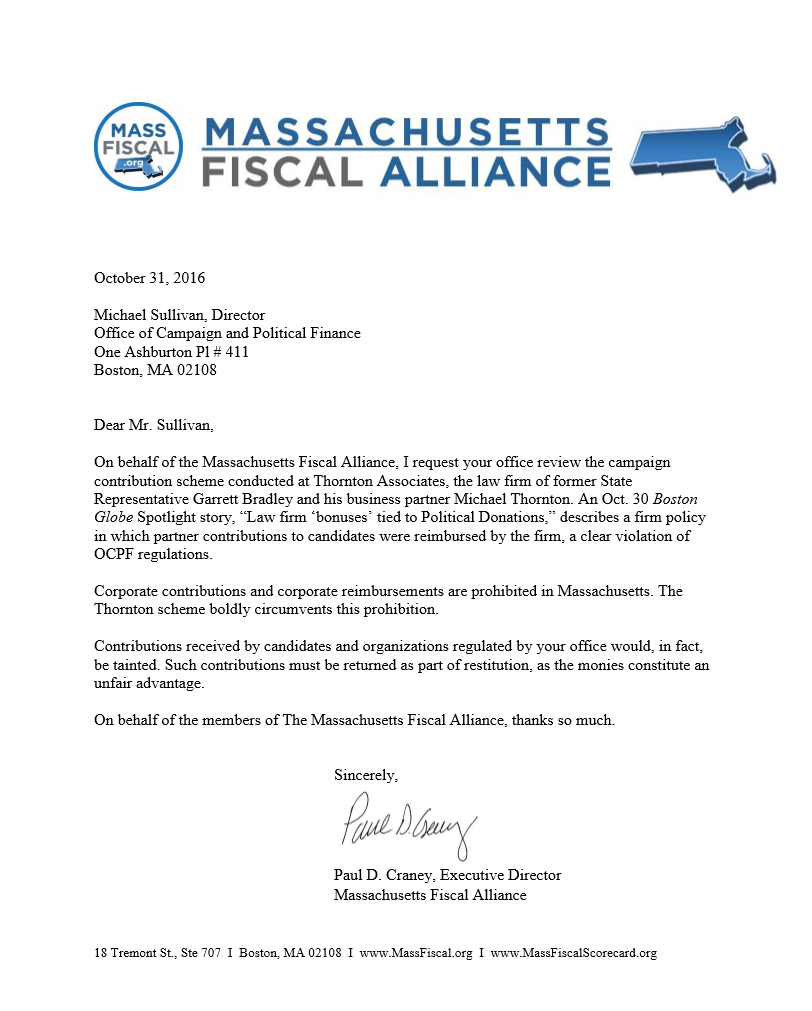