The Speaker made the bill available to the public and legislators the day before the vote took place. House lawmakers went into the evening hours, offering amendments and debating their ideas. For those of us who watch the legislature closely, this type of public debate and demand for roll call votes almost never happens.

How did your State Rep vote? Link to the roll call vote is available here: https://massfiscalscorecard.org/vote.php?vote_id=1307
House Republicans offered many great amendment ideas that would tighten the security of our elections. Minority Leader Brad Jones (R-Reading) spoke on his amendment that would challenge the constitutionality of making massive statewide vote by mail permanent. He argued that if the state is going to make this experimental way of voting permanent, the state’s highest court should be consulted before it becomes law. Speaker Mariano dispatched Rep. Dan Ryan (D-Boston), the Chairman on the Joint Committee of Election Law, to rebut the Republicans and ultimately defeated the amendment on almost strict party line with only Representative Garry (D-Dracut) breaking with her party to side with common sense. Another rare floor speech followed by State Rep. Kim Ferguson (R-Holden) in support of an amendment she co-sponsored that would bring penalty consequences to voter fraud, but Rep. Ryan told his Democratic House members to vote against it because the status quo is working. This amendment and virtually every other amendment struck a nerve with left wing organizations which immediately described the amendment as rooted in “racism.” 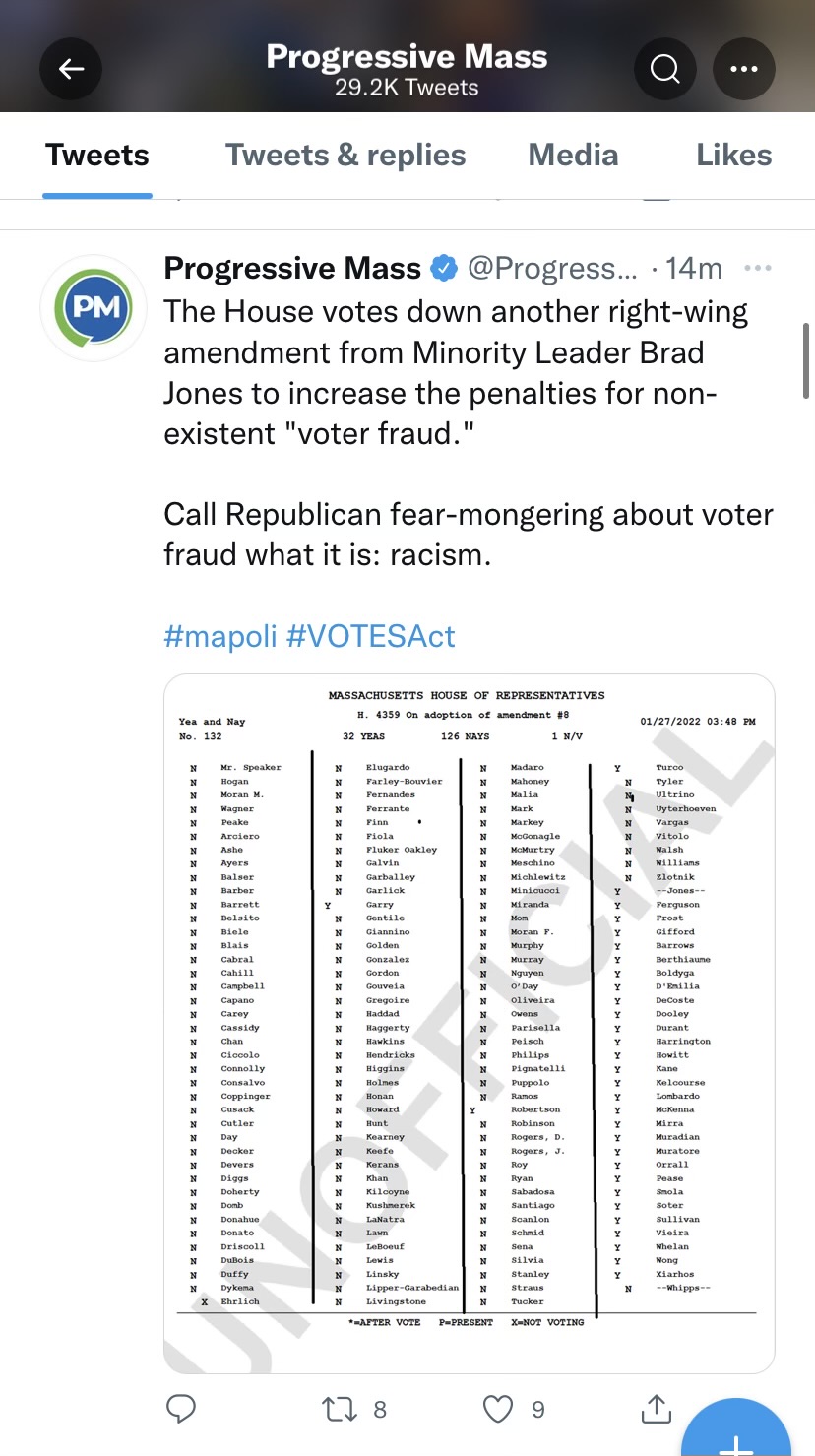 Rep. Jim Kelcourse (R-Amesbury) offered an amendment that would post vote by mail applications on the internet instead of mailing every voter an application even if they didn’t request it. By this point, the Democratic leadership began to show they didn’t have a good argument against the Republicans. As Rep. Ryan got up to speak against Kelcourse’s amendment, his main argument against it was because “we are moving forward with this.”

As the night went on, left wing House lawmakers got a taste of how “democracy” runs under the iron fist of Democrat leadership. While the State Senate’s Democratic election bill included “same day voter registration” in addition to making vote by mail permanent, the House version did not. The left wing and socialist crowd in the House offered an amendment that would add same day voter registration. House leadership shot it down with a procedural move, and instead voted in favor of “studying” the issue. When the House vows to study an issue, it’s their way of shelving it forever. The tactics leadership formerly used against vocal Republicans are now being used against the increasingly fringe elements of House Democrats.

As the night went on, Republican State Rep. Peter Durant (R-Spencer) finally spoke up and he had a lot to say. He offered several amendments that would prohibit Michelle Wu style vaccine passports to enter a building if it had a polling location. Currently, some buildings that host polling locations require a vaccine card to enter. Durant told the House members he did not show a vaccine passport when entering the State House to vote and he didn’t think voters should be required to do the same. Speaker Mariano has hinted that he will follow in Mayor Wu’s footsteps and order a vaccine passport upon entering the State House, which is also a polling location. Durant’s amendment was defeated, but he then offered another twist. His next amendment would require a proof of photo ID in addition to a vaccine card if they are mandatory for voters to enter a polling location. By this point, House lawmakers were in knots since supporting the proof of being vaccinated was challenged by their opposition to showing an ID to vote. Both of Durant’s amendments failed.

Rep. Paul Frost (R-Millbury) went next and offered a straight Voter ID amendment. He spoke at length about his amendment but didn’t seem to win many over. By this point, it was 8:30 p.m. and House lawmakers defeated Frost’s amendment by a vote of 126-32 with three Democrats siding with the Republican caucus.

Right before the night finished, Rep. Jones offered an amendment that did pass via a voice vote. His amendment would require the Secretary of State to produce a summary of results for vote by mail campaigns and have those results sent to the clerk’s office in the legislature. It's still unclear to us if that means the report will be made available to the public, but we will work toward making sure the public has access to this if it becomes law.

The final vote on Speaker Mariano’s opaque Democratic partisan election bill was 124-34, with all the Republicans in opposition along with five Democrats, some who were slighted by that procedural gimmick they experienced from their own leadership. The Democratic election bill now must go to a conference committee with the Senate before it can head to Governor Bake’s desk. The House and Senate versions have significant differences and both bills didn’t receive a single vote by any of the legislative Republicans. It's routine for the conference committee to add new policies to legislation behind closed doors, so we will keep a close watch to what happens next if the conference committee decides to move at all.

Overall, the left didn’t get what they wanted. They want to make mail in voting permanent, add same day voter registration, and ultimately to mail every voter a live ballot. 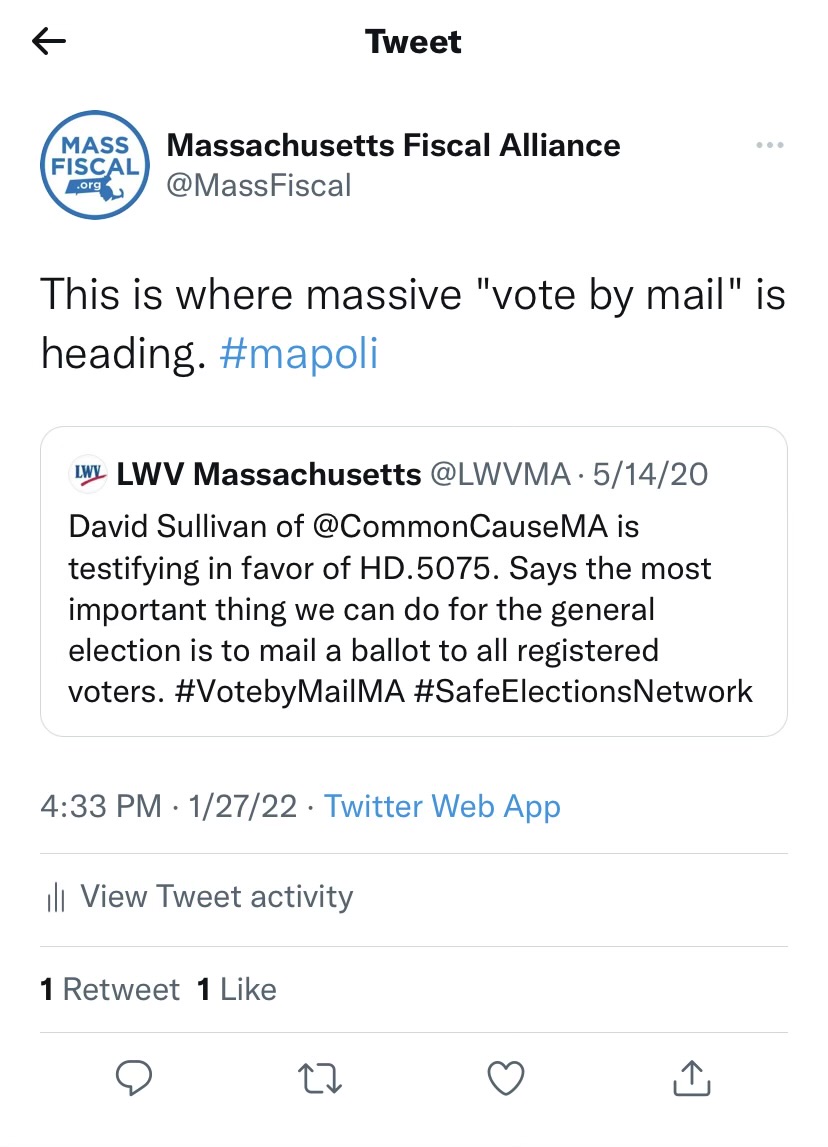 Legislative leadership used bully tactics that resulted in two different bills passed with ONLY partisan Democratic support. The national polls that show President Joe Biden and Democrats very unpopular with average voters seem to be making an impact with legislative Democrats here in Massachusetts as they try to change the rules for this November in order to help bail out their party’s unpopularity.
How did your State Rep vote? Link to the roll call vote is available here: https://massfiscalscorecard.org/vote.php?vote_id=1307
It’s important for Republicans and common-sense Democrats to speak up and hold accountable the majority party when they try to change the rules in favor of their party’s electoral success. That happened last night. We will keep you updated on what happens next.
voter integrity vote by mail mariano election law same day registration Voter ID
Do you like this post?
Tweet