Massachusetts Fiscal Alliance made the following statement in response to Senator Marc Pacheco’s (D-Taunton) climate change junket to Hawaii. According to estimates from the International Civil Aviation Organization, around 1.2 metric tons of CO2 were released into the atmosphere so that the senator could virtue signal in comfort.

“Senator Pacheco never turns down a junket, even at the expense of the environment. As far as our legislature goes, he is in the junket hall of fame. Between 2014 and 2018 alone he took 28 special interest funded trips abroad—more than any other single legislator and well and beyond the average of his peers,” stated Paul Diego Craney, spokesperson for Massachusetts Fiscal Alliance. 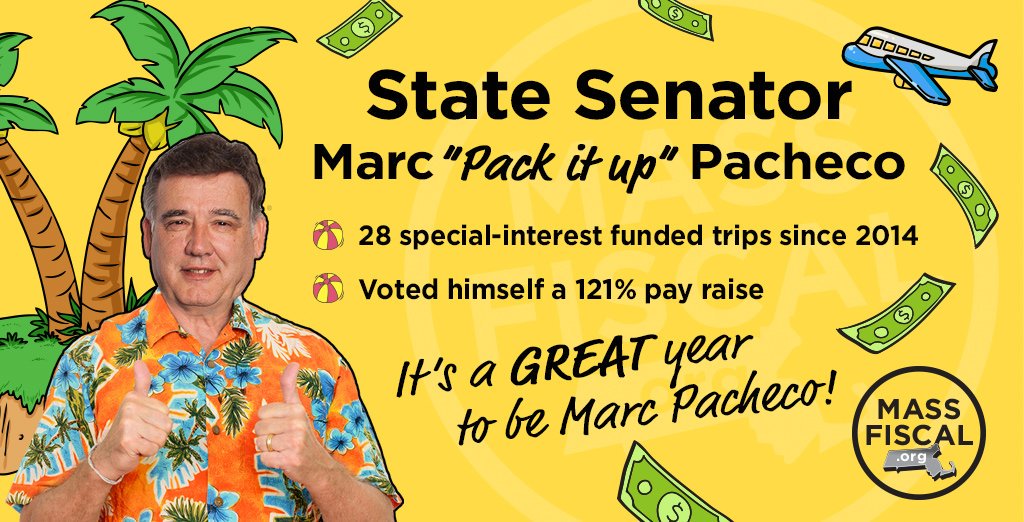 “Senator Pacheco’s most recent junket to Hawaii, which he ostensibly undertook to attend a ‘climate change’ meeting, is estimated to have released 1.2 tons of carbon for the roundtrip flights. According to the EPA, that’s almost the equivalent of driving a car for over four months or burning over 1,300 pounds of coal. Senator Pacheco’s trip used as much CO2 to charge 152,538 smart phones,” stated Craney.

“To make up for Senator Pacheco’s environmental pollution for just this one trip alone, his district would need to plant almost two acres of new forest to guzzle up his jet fuel pollution. It would take twenty trees over ten years to remove enough CO2 from the atmosphere to make up for the Senator’s Hawaiian junket,” continued Craney.

“I daresay they could have reduced these emissions by locating the conference somewhere more central than an island in the middle of the Pacific Ocean— Omaha and Kansas City both have Amtrak stations. One thing is abundantly clear; when Senator Pacheco is faced with fighting climate change or booking his next junket, he chooses junket every time,” concluded Craney.

Senator Pacheco’s latest junket was disclosed when he provided an interview to the Statehouse News Service on October 15 from Hawaii. During that interview, Senator Pacheco was responding to Massachusetts Fiscal Alliance’s call that any action by the proposed Transportation Climate Initiative (TCI), needed legislative approval since it would result in a higher gas tax. While speaking to reporters over the phone from Hawaii, Senator Pacheco reiterated that he didn’t think the legislature should have to vote on a TCI gas tax.