The Massachusetts Fiscal Alliance and other opponents of the controversial and undemocratic Transportation and Climate Initiative (TCI) gathered at the State House on Wednesday for a press conference sounding the alarm on the TCI European style league of states and calling on lawmakers to push for a vote on the tax scheme in the legislature.

“TCI is a carbon tax implemented through a gas tax. Its regressive toward the working class. It acts like a sin tax, punishing ordinary people for doing a task the government believes is wrong by artificially increasing the cost. Its bad economics and morally wrong,” said Paul D. Craney, spokesman for the Massachusetts Fiscal Alliance. 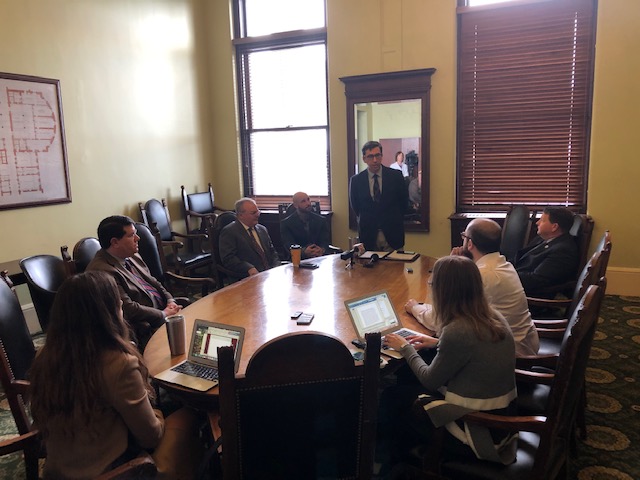 During the conference, Representative DeCoste announced his intention to file legislation that would require legislative approval before the Governor could enter Massachusetts into any TCI-like compacts.

“While taxpayers are the most obvious victims of TCI, individual legislators are affected as well. Rank and file members are being stripped of their prerogatives and denied an opportunity to carry out the duty they were elected to perform. Taxpayers and constituents deserve more, and lawmakers should demand more,” continued Craney.

“Make no mistake: this is a very slippery slope for Massachusetts. Lawmakers from other states in the TCI agreement are seeking legislative approval. Governor Baker’s administration, whether legally required or not, should also act in good faith and seek legislative buy in. What could be lost by the Governor seeking support for a tax increase that would impact every person in Massachusetts? If he doesn’t, it’s the legislature’s job to hold him accountable. There must be an open and transparent legislative process on the details of the agreement,” concluded Craney.